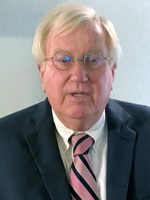 William H. Yarborough, MD, FACP, FASAM is Professor Emeritus of Medicine at the University of Oklahoma (OU) - School of Community Medicine and currently is Director of Seva Medcare Addiction Medicine Services, in Tulsa, OK. He is a Fellow of the American College of Physicians, and a Fellow of ASAM. He received his certification in Addiction Medicine, ABAM in 1998, and most recently ABPM. He graduated from the University of Oklahoma College of Medicine, with AOA status. He completed an Internal Medicine residency at OU. From 1981-89, he was the Director of Emergency Services at Hillcrest Medical Center in Tulsa. He also helped direct both ambulance and helicopter services in the Tulsa area.

In 1990, he joined the faculty at OUSCOM in the department of Internal Medicine. During that period, he directed 4th year training in ambulatory medicine, and chosen twice by graduating students to receive Aesculapian Award (Best Faculty). Over 15 years of his tenure at OU, he was the director of Internal Medicine Clinics, and served as Executive Vice-Chair of the Department of Medicine for 5 years.

During his role at OU, he was the Medical Director of one of the largest centers in Oklahoma, the 12&12 Treatment Center in Tulsa; he also created a Fellowship in Addiction Medicine, and served as Program Director for 6 years during its existence.

He has served on legislative task forces and advisory committees and most currently, involved in working on prescription drug abuse in Oklahoma. He also served on a task force regarding drug use in pregnancy. He played a role in creating the ASAM state chapter in Oklahoma and served as President for two years; and is currently the Immediate Past President. Dr. Yarborough currently serves as Region VII Director on the ASAM Board of Directors and has served on ASAM writing committees; and, is a member of the ASAM Public Policy Committee.

He has published several papers largely around opiate use, and treatments.