Home About Us Leadership Board of Directors Biography - Anthony P. Albanese, MD, DFASAM 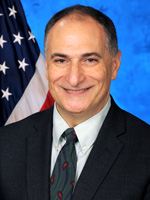 Anthony P. Albanese, MD, DFASAM is an Affiliations Officer with the VA Office of Academic Affiliations. He is also a Clinical Professor of Medicine and Psychiatry at the UC Davis School of Medicine. He attended college and medical school at Oral Roberts University in Tulsa Oklahoma, graduating in 1986. He did his residency in internal medicine and fellowship in gastroenterology at The St. Luke’s- Roosevelt Hospital Center in New York. During those years, he became interested in addiction medicine, working in the hospital’s methadone clinic and detoxification programs.

Under the mentorship of physicians supervising these programs, he became a member of ASAM while still in training and became a certified addictionist in 1991. He completed his hepatology fellowship at the University of Miami in 1992, and after 3 years of private practice, became the co-director of the addiction treatment program at Mount Sinai Hospital in Miami Beach, FL. As an Associate Professor of Medicine and Psychiatry at the University of Miami, he worked with the GI/Liver transplant programs, and taught in the Addiction Psychiatry fellowship program.

In 2001, he moved to Sacramento California and continued his work at the VA in gastroenterology, hepatology, and addiction medicine. Since then he has had roles as the VA Site Program Director for the UC Davis Internal Medicine and Family Medicine programs, then the Associate Chief of Staff for Education, then the Deputy Chief of Staff in the VA Northern California Healthcare System. In 2016, he accepted a national position as an Affiliations Officer with the VA Office of Academic Affiliations. He continues clinical work at the Northern California VA. His research interests have been in the medical aspects of opioids and alcohol, and intestinal changes associated with HIV infection.