Candidate for Director At Large 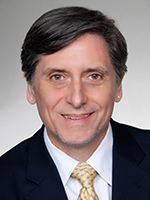 William Santoro, MD, FASAM was born in New York and attended college in Pennsylvania. After graduating medical school in Puerto Rico, Dr. Santoro returned to Pennsylvania and completed a Family Medicine residency. His plan was to return to New York and open a Family Medicine practice, until he met and married Jill. He and his wife started a private and successful Family Medicine practice while raising their two children. Dr. Santoro became interested in Addiction Medicine early in his career and added it to his practice after becoming board certified through ASAM and then ABAM.

Over the years, the practice flourished, and Dr. Santoro recruited two board certified family physicians. In 2012 he sold his private practice to the Tower Health System and continued to practice through the health system as a family physician and Addictionist. In 2016 Dr. Santoro transitioned to working full-time in Addiction Medicine through the Tower Health system where he remains today. With the support of a colleague, the Section of Addiction Medicine was created and he was named Chief of the Section. Since then he has expanded the Section to include 3 full-time Board Certified Addictionist and a staff of 7. He looks forward to continuing to build the Section further.

1. What have been your greatest contributions to ASAM or to the field of addiction medicine over the last 10 years?
Although this question specifically asks for contributions over the past 10 years, many of the projects I have proudly worked on began more than 10 years ago and are still evolving today.

I began working in a methadone maintenance clinic in 1999 and quickly saw how unfair patients on methadone maintenance were treated in the justice system. In 2006, the standard treatment of patients on methadone maintenance entering the prison system was to discontinue methadone and treat withdrawal symptoms with Tylenol #3 or Vicodin, thus priming the patient for relapse upon release. With the help of the Executive Director of Berks County’s SCA, known as The Council on Chemical Abuse (COCA), I was introduced to Judge Peter Schmehl. Together we met with the Warden of the Berks County Jail. After several meetings with the medical providers of the jail, we came to an agreement. Patients entering the judicial system who were part of the local methadone program would remain on their medication. Now in 2022, 16 years later, it is common to hear incarcerated patients on medication will remain on medication; but in 2006 this was unheard of and not the standard of care. We furthered this program by making counseling from the methadone clinic available to these patients while they were incarcerated.

In 2010 I worked with a team of physicians including the Chairs of the departments of Ob-Gyn and Psychiatry to establish a relationship with the local methadone clinic to improve the care of pregnant opioid dependent patients. The standard of care at the time was for a pregnant patient to be inducted into methadone maintenance as an outpatient. What I noticed was it was not uncommon for these patients to continue to use illicit opioids for weeks until they were stabilized on methadone. Together we created a protocol that allowed any woman who was identified as pregnant and opioid dependent to go through the emergency department and be admitted directly to the obstetrical unit. A protocol was put in place that detailed the appropriate methadone induction as an inpatient over the next 3 to 5 days. The logic used when we presented this to the hospital administration was that, although insurance companies were not covering the cost of these admissions, these patients were effectively being transitioned from a high-risk pregnancy to an average- risk pregnancy.

In 2006 I was asked by a colleague for advice on a patient hospitalized and identified as opioid dependent. That single curbside consultation grew into the Addiction Consultation Service. The service remained in place with me as the only board-certified Addictionist handling all the consults. In 2014 I approached the Chair of the Department of Psychiatry and shared my vision of someday creating an independent Section of Addiction Medicine. To my amazement she and I created a Section within the next three months, and I was honored to be named the first Section Chief of Addiction Medicine at Tower Health System. Since then, Tower Health System supported me in recruiting two more board-certified Addictionists. The name of the consultation service has been appropriately changed to the Addiction Consultation Team and includes three board-certified Addictionists. In the first year, 2006, I completed 12 consults. Last year, 2021, the Addiction Consultation Team completed well over 900 consults. Along with the impatient consultation service, the Section of Addiction Medicine now also sees hundreds of patients each month in an outpatient clinic combining the philosophy of 12 steps, formerly known as abstinence based treatment, with the science of medication treatment, formerly known as MAT.

2. How would your election to the ASAM Board of Directors benefit ASAM and the field of addiction medicine?
I believe I work well with other colleagues collaborating on initiatives. I also believe that in a position such as this, we need to imagine what we want this field to look like in the future, and then work to make that happen.

I was involved in receiving two grants that were meant to create, and then further, the “Hub & Spoke” model. The grant stated that we were to create a standard Hub & Spoke model whereby patients were seen in the Hub run by Addictionists, stabilized, and transferred to a Spoke run by primary care providers. My vision of the Hub & Spoke model is much more intricate than what was written in the grant. To begin with, my vision is a two-way street. Patients would begin at either the Hub or a Spoke and have their care continued, if they were stable, at a Spoke. If the patient becomes unstable, for whatever reason, with one telephone call the patient would be back at the Hub. This telephone call could be initiated from a provider at the Spoke or from the patient themselves. Each patient is informed when they were sent to a Spoke, that they are not being transferred out of the Hub practice; they are always considered an active patient at the Hub, no matter how long they are followed at a Spoke. But this two-way street is only the beginning.

Another exit off of this Hub & Spoke model highway is to include hospitals and emergency departments. With an established relationship, a hospitalized patient could be transferred to either a drug and alcohol facility or to a Hub with nothing more than a simple telephone call.

Yet another exit off this Hub and Spoke model pulls in sober living and halfway houses. The same two-way philosophy exists. With nothing more than a telephone call the process is set in motion to get a patient from a hospital, a drug and alcohol facility, a Hub, or a Spoke into a halfway or sober living house. The reverse is also true. If necessary, a patient in a sober living or halfway house could, with nothing more than a telephone call be sent to a Hub, a spoke, the hospital, or a drug and alcohol facility.

The final piece of this vision is to interconnect this highway system with an identical system in other parts of the county, or in another county. This would allow patients who are in one county and need to be transferred to another county, proper healthcare with minimal interference.

All this ties into my interest in serving ASAM as I wish to make the disease of addiction as treatable as diabetes and hypertension in the primary care setting. Many chronic diseases are managed by primary care physicians-- so, too, should be addiction. Just as there are Cardiologists and Endocrinologists to handle the more complex patients in their fields, there should be Addictionists to handle the complex patients in our field. I look forward to the day when a patient diagnosed with a substance use disorder is typically treated by a primary care provider and when admitted to a hospital on any form of medication treatment for addiction, that patient is met with the same attitude from healthcare workers as a patient who is admitted to a hospital on simvastatin or insulin.